MPN
90YV06A0-M0NA00
SKU
RADR523X2SIL
Out of stock
£65.11
Notify me when this product is in stock
Delivery: 1-2 Working Days Expected Delivery Date is 18th May, 2022
Add to Wish List Add to Compare
Be the first to review this product
Skip to the end of the images gallery 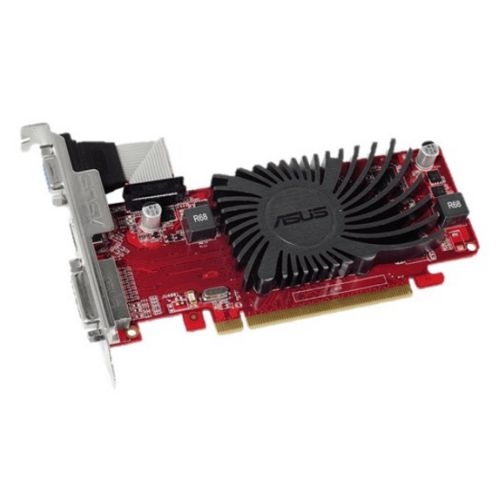 Graphics galore for everyone!

R5 230 is the fantastic new graphics card from ASUS. Engineered with a highly-efficient 0dB thermal design, it dissipates heat in complete silence — making R5 230 the perfect choice for your slimline home-theater PC (HTPC) build. Advanced EMI shielding reduces electromagnetic interference by up to 66% for a stable signal, pin-sharp images and safer and healthier computing. And because we know you love to customize, use the included GPU Tweak software to control video memory, voltages and cooling fans and even stream live gameplay in real time!
I/O Ports Highlight

Clearer signals and safer usage
ASUS reduces 66%* of electromagnetic interference both given off and received by the card - resulting in a more stable signal, clearer screen display, and a safer, healthier computing environment.

GPU Tweak streaming tool that lets you share on-screen action in real time – so others can watch live as games are played. It's even possible to add to the streaming window scrolling text, pictures and webcam images.

GPU Features
Powered by AMD RadeonTM R5 230
CrossFire Support
Multi-GPU technology for extreme performance.
AMD HD3D
Immerse in stereoscopic 3D gaming and get up close and personal with your favorite stars while watching Blu-ray 3D. AMD HD3D is also designed for professionals who create complex visual effects and detailed data visualizations.
DirectX® 11
DirectX® 11 GPU-accelerated tessellation allows more detailed geometry to be packed into a scene, allowing characters to be rendered with cinema-quality detail.
Microsoft Windows 8.1 compatible
Gives you access to advanced computing experiences with the latest operating system so you get more done with your PC
More Information
Reviews
Write Your Own Review