MPN
90YV0AK0-M0NA00
SKU
RADRX580STX8OC
Out of stock
£480.15
Notify me when this product is in stock
Delivery: 1-2 Working Days Expected Delivery Date is 24th May, 2022
Add to Wish List Add to Compare
Be the first to review this product
Skip to the end of the images gallery 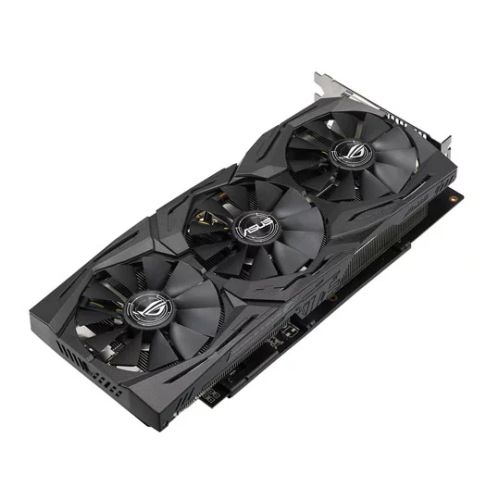 Optimal System Cooling
ASUS FanConnect II features two 4-pin, hybrid-controlled headers that can be connected to both PWM and DC system fans for optimal system cooling. The connected fans reference both the GPU and CPU, operating automatically based on the one with the higher temperature. A comprehensive set of tuning options allow you to tune fan speeds for efficient cooling.
GPU Tweak
GPU Tweak II lets you easily set these ASUS FanConnect II modes:

Manual mode:
Allows you to set a fixed speed for connected fans.

User-defined mode:
Allows you to set chassis fans to reference either the CPU or GPU temperature to determine rotational speed. Additionally, a smart, automatic calibration routine senses the controllable range of connected fans and allows you to fine-tune speeds for efficient cooling and low noise.
Auto-Extreme Technology

Easily Enjoy Immersive Virtual Reality Experience
ROG Strix graphics cards have two HDMI ports for connecting a VR device and display at the same time, so you can enjoy immersive virtual reality experiences anytime without having to swap cables.
Your Need for Speed, Fulfilled