MPN
90YV0CF0-M0NA00
SKU
RADRX590STX8
Out of stock
£479.23
Notify me when this product is in stock
Delivery: 1-2 Working Days Expected Delivery Date is 17th May, 2022
Add to Wish List Add to Compare
Be the first to review this product
Skip to the end of the images gallery 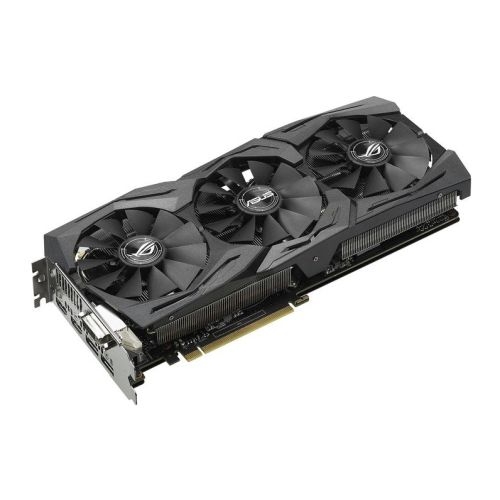 With cooling innovations that keep AMD's latest GPU chilled, software utilities that put you in control of performance tweaking, and aesthetics that blend with a vast range of hardware, the ROG Strix Radeon RX 590 delivers exceptional graphics performance and looks good while doing it.

Engineering
Auto-Extreme Technology
Precision Automated Manufacturing
All ROG Strix graphics cards are produced using Auto-Extreme Technology, an automated manufacturing process that sets new standards in the industry by allowing all soldering to be completed in a single pass. This reduces thermal strain on components and avoids the use of harsh cleaning chemicals, resulting in less environmental impact, lower manufacturing power consumption, and a more reliable product overall.
Metal Frame
Architecture FTW
Our engineers have boosted the ROG Strix Radeon RX 590's structural integrity with a metal frame to prevent excessive torsion and lateral bending of the PCB. The frame features thermal pads that help improve memory IC and MOSFET cooling by 10%.
Software
GPU Tweak II
Monitor, Tweak and Tune
The ASUS GPU Tweak II utility takes graphics card performance tuning and to the next level. It allows you to tweak critical parameters including GPU core clocks, memory frequency, voltage settings, and more with the option to monitor everything in real-time through a customizable on-screen display. From fine-grain performance tuning to advanced fan control, GPU Tweak II has all the tools you need to get the most out of your graphics card.
XSplit Gamecaster
Premium streaming
XSplit offers a premium streaming experience with in-game annotations and other advanced features. Enjoy a free license with the purchase of select ASUS graphics cards. See you online!
wtfast
Play lag-free
We've partnered with wtfast to help you to play free from lag, latency and lost packets. With a 6-month subscription to the wtfast Gamers Private Network, you'll enjoy lower ping for a smoother, more fluid online gaming experience. Buy an ASUS graphics card - and don't be left waiting!
Quantum Cloud
Profit from GPU power
Quantum Cloud is a simple and secure service that lets you effortlessly earn extra money by putting your idle GPU to work. Through an easy-to-use app, your computer can help run cloud-based applications, making you money in the process. Earnings are automatically transferred to your WeChat or PayPal account, and your privacy remains intact because no personal data is stored online. Get started making money today!
Experience
Aura Sync
Outshine the competition
The ROG Strix features Aura RGB lighting on both the shroud and backplate. Get Aura Sync software to connect compatible products and create a completely customized gaming setup. You can sync illumination to music, set lighting to change color based on temperature, or select from a large number of patterns and static options.
ASUS FanConnect II
Smarter fan speed
ASUS FanConnect II features two 4-pin, hybrid-controlled headers that can be connected to both PWM and DC system fans for optimal system cooling. Connected fans react to GPU and CPU temperatures, so that your system is optimally cooled no matter what you do. A comprehensive set of tuning options allow you to tweak fan speeds for your preferred balance of cooling and acoustics.
Radeon Freesync™ Technology
See me now?
Gaming shouldn't be a choice between choppy gameplay or broken frames. With the ROG STRIX Radeon RX 590, it doesn't have to be. Get fluid, artifact-free performance at virtually any framerate with Radeon FreeSync™ technology.
More Information
Reviews
Write Your Own Review