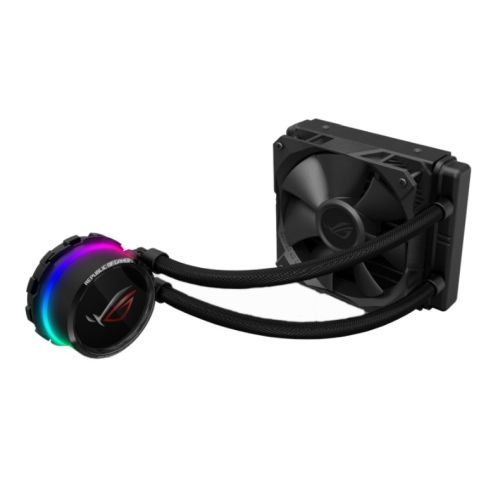 Ryuo, the dragon king in japanese mythology, symbolises the power of the ocean and is known as a water deity associated with rainfall and winds. Ryou bestows safety to people by maintaining a balanced climate.

For the past decade, ROG has focused on developing a complete eco system of products for the gamers around the world. We've been deliberate in our approach, starting with motherboards, and then gradulayy expanding into other major product categories. With the foundation firmly set, it's time for us to delve deeper into the PC component landscape so that we can provide our customers with the full ROG experience. It is with this goal in mind that we would like to introduce the ROG RYUO series of liquid CPU Coolers.
With optimised cooling performance and unique enhancements like Aura Sync Lighting and an embedded full colour, live dash OLED Panel, our latest AIO's bring ROG engineering to a vital part of your PC.

ROG has developed the world's first AIO Cooler to feature an embedded 1.77" LiveDash colour OLED panel that can show realtime system stats and personalised gifs. Our LiveDash software even allows the display to be synchronised with the LiveDash OLED panel that's featured on high end Asus Motherboards.

ROG always focuses on the needs and wants of gamers and enthusiasts. The RYUO is no exception, and achieves it's refined aesthetics through constant iteration and redesign.

The Addressable RGB lighting of RYUO adds a subtle glow that helps to highlight the CPU as the of any build. The impact is further enhanced with ASUS Aura Sync extending harmonised effects throughout the sytem.