MPN
NE5107T015P2-1043D
SKU
NVGTX1070TIX8PAL-DUAL
Out of stock
£535.58
Notify me when this product is in stock
Delivery: 1-2 Working Days Expected Delivery Date is 8th July, 2022
Add to Wish List Add to Compare
Be the first to review this product
Skip to the end of the images gallery 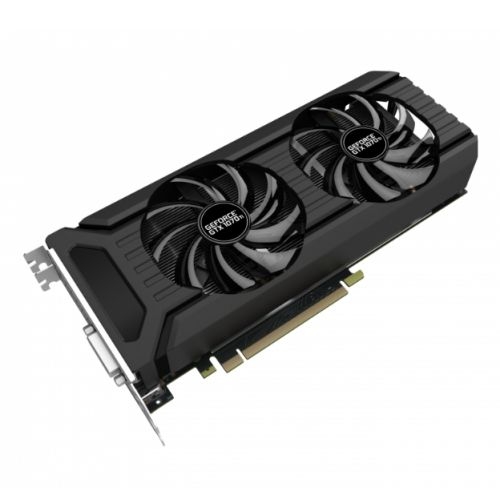 Palit GeForce®GTX 1070 Ti Dual is build with "Dual Fan", provides 2 slot thermal solution for SLI users.Take on today’s most challenging, graphics-intensive games without missing a beat. The GeForce®GTX 1070 Ti delivers the incredible speed and power of NVIDIA Pascal™—the most advanced gaming GPU ever created. This is the ultimate gaming platform.
The World's Most Advanced Gpu Architecture

GeForce GTX 10-series graphics cards are powered by Pascal to deliver up to 3X the performance of previous-generation graphics cards, plus breakthrough gaming technologies and VR experiences.

Capture and create in-game screenshots that can be viewed in 360 degrees. Compose your screenshots from any position, adjust them with post-process filters, capture 4K HDR images in high-fidelity formats, and share them in 360 degrees using your mobile phone, PC, or VR headset.

Honeycomb Bracket
The design of honeycomb bracket increases airflow by up to 15%, allowing the heat generated from GPU to be exhausted via the honeycomb design bracket. This enables more efficient cooling effects.
0-dB Tech
Keep Silent while you are experiencing the multimedia application and general workload. The operating fans only occurs while working on heavier loading such as gaming that the GPU temperature surpasses 50°C.

Dual Fan
A Dual Fan design offers double the cooling performance, and combined with the 9CM-9CM Smart Fans, heat is effectively drawn away from hot spots.

DrMOS
DrMOS, originally only available for high-end server CPUs, is now available in all its glory in the next generation of Palit graphics cards. DrMOS offers high current circuits, low noise operation, and effective reduction of heat generating.
ThunderMaster
ThunderMaster is a utility program for the graphics card under Windows, and provides you to boost performance of the graphics card and to monitor the GPU information, which will only function correctly in conjunction with your new graphics adapter.
More Information
Reviews
Write Your Own Review